In the first three chapters of his famous novel Baridegi, which is translated into many languages, the eminent South Korean writer Hwang Sok-yong describes the upbringing of his later migrant protagonist in North Korea. One characteristic feature of Hwang’s narrative about North Korea is his abundant use of specific terminology in which ideology and reality of the Democratic People’s Republic of Korea (DPRK) are crystallized. This creates an effect of authenticity and reflects the author’s concern for the living conditions in the DPRK. We also learn how the author depicts the plight of North Korean defectors as one of globalization’s dark side.

This lecture will link the specific terminology used in the novel Baridegi to official DPRK discourse but also to various reports on conditions in North Korea published by scholars, journalists, defectors and others. By looking at the vocabulary and the concepts behind – embedded in the holistic perspective of a novel, but read in parallel with other sources – we get a vivid grasp of how North Korean society is organized.

Andrii RYZHKOV holds a PhD in Asian and African Languages from the National Academy of Sciences of Ukraine. He has taught undergraduate and graduate courses at Taras Shevchenko National University of Kiev, Ukraine, at several universities in South Korea (Kyung Hee University, Korea University, and Hankuk University of Foreign Studies), as well as at the Autonomous University of Nayarit in Mexico.

He is a member of the National System of Researchers administered by Mexico’s National Council of Science and Technology. Besides his academic work, he is also a translator of Korean contemporary literature and serves as an official sworn translator and interpreter authorized by the federal judiciary of Mexico, having served the governments of Ukraine as well as of South Korea. His research interests gravitate on translation studies but also relate to country image and nation branding, as well as media and cultural consumption. 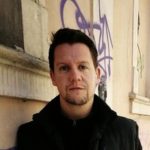 Next post
Along the Mountain-Spine of All Korea: Trekkers, Tourists, Spirits and Sacred-Sites of the Baekdu-daegan Range
Funded by: